The untitled project stars McEntire as Ruby Adair, the sheriff of colorful small town Oxblood, KY, who finds her red state outlook challenged when a young FBI agent of Middle Eastern descent is sent to help her solve a horrific crime. Coleman will play Deke Adair, Ruby’s ruggedly handsome ex-husband who is now married to Ruby’s former best friend, Randa (Amanda Detmer). Deke is a good and decent man who feels badly for the pain he has caused Ruby, but is also honest about the anger he feels towards her. Also previously cast in the pilot are Ben Esler and Natalie Hall.

I am thrilled to be coming back home to ABC. What makes it all the sweeter is Reba McEntire is coming with me. And we can’t wait to share with our fans this wonderful Southern Gothic soap opera we’ve been cooking up for them.

We will be posting more info as we get it, stay tuned! 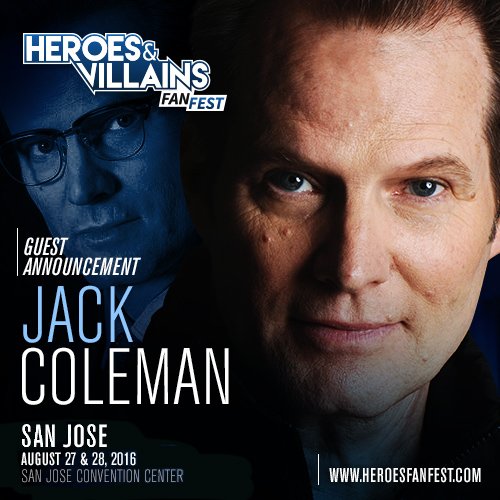 Good news! Jack Coleman is currently filming what appears to be a TV movie with Preston Jones and Ryan Kelley! Preston Jones posted a behind the scenes photo of them on his Instagram.

We will update everyone with more details as they become available!

Posted in behind the scenes, news, Preston Jones, Ryan Kelley

For more information & to purchase tickets, visit the official site for the event: HEROESFANFEST

NBC is busy with promoting the show and this means lots of Jack Coleman photos and interviews for the fans.

Check out our gallery HERE to see the Jack Coleman photos from the TCA Summer Press tour.

Here are the Jack Coleman interviews:

Here’s  another interview of Jack Coleman on KSiteTV where he also talks about his Castle character: HRG Reborn: Jack Coleman Talks Heroes’ Revival & His Castle Return
We are glad that Jack Coleman is going to have a busy, busy fall.

NBC has released the first trailer for Heroes Reborn! We are very excited about seeing Jack Coleman as HRG again!

And here’s NBC’s new official description of the series:

A year ago, a terrorist attack in Odessa, Texas, left the city decimated. Blamed for the tragic event, those with extraordinary abilities are in hiding or on the run from those with nefarious motives.

Two such vigilantes include Luke (Zachary Levi, “Chuck”) and Joanne (Judith Shekoni, “The Twilight Saga: Breaking Dawn – Part 2”), who are seeking to avenge a tragic loss.

Noah Bennet, aka H.R.G. (Jack Coleman, “Heroes”), has gone off the grid but conspiracy theorist Quentin Frady (Henry Zebrowski, “A to Z”) finds him and opens his eyes to the truth behind the Odessa tragedy.

While in hiding, some are discovering their newfound skills. Awkward teen Tommy (Robbie Kay, “Once Upon a Time”) just wants to be normal and win the girl of his dreams, Emily (Gatlin Green, “Criminal Minds”), but normalcy is virtually impossible after learning of a new ability that terrifies him. Coming from a very sheltered upbringing, a bold and ethereal teenager, Malina (Danika Yarosh, “Shameless”), has been told she is destined for greatness. In Tokyo, a quiet and unique young woman, Miko (Kiki Sukezane, “Death Yankee 3”), is trying to track down her missing father while hiding an extraordinary secret that will make her a force to be reckoned with. Elsewhere, a different type of hero is emerging through former soldier Carlos (Ryan Guzman, “The Boy Next Door”).

Meanwhile, Erica (Rya Kihlstedt, “Masters of Sex”), the head of the highly successful tech conglomerate Renautas has an agenda of her own.

For better or for worse, some are fated to cross paths with assorted heroes of the past, including Hiro Nakamura (Masi Oka), Matt Parkman (Greg Grunberg), Mohinder Suresh (Sendhil Ramamurthy) and the Haitian (Jimmy Jean-Louis), among others. Yet, together, their ultimate destiny is nothing less than saving the world and mankind.

Heroes Reborn: We have a date

And that date is September 24 2015 at 8 pm, and then on the following Thursdays.

Other possible topics for the new season of Castle now that the show has been renewed: More trouble from Senator Bracken — the man responsible for Johanna Beckett’s murder.

“We think that there’s some storytelling opportunity with Senator Bracken, who’s currently behind bars,” Marlowe says. “But we know that he has lots of friends and allies out there. A lot of that has been laid to rest, but when you make an enemy that is that formidable, they reemerge, and they reemerge stronger and in unexpected ways.”

It sounds like our favorite evil Senator Bracken will appear in season 8!

As we already posted on our Tumblr, we finally have some news about Heroes Reborn!

The network teased Heroes Reborn last February and then announced in May plans for a 13-episode series that would continue the story of Heroes.